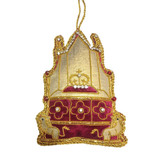 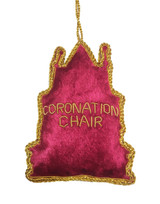 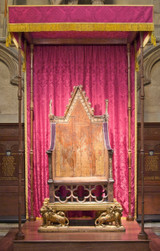 The Coronation Chair was made for King Edward I to enclose the famous Stone of Scone, which he brought from Scotland to the Abbey in 1296, where he placed it in the care of the Abbot of Westminster. The King had a magnificent oaken chair made to contain the Stone in 1300, painted by Master Walter and decorated with patterns of birds, foliage and animals on a gilt ground. The figure of a king, either Edward the Confessor or Edward I, his feet resting on a lion, was painted on the back. The four gilt lions below were made in 1727 to replace the originals, which were themselves not added to the Chair until the early 16th Century.

Every monarch has been crowned in this chair since Edward II in 1308, except Edward V and Edward VIII, who were not crowned. At the joint coronation of William III and Mary II in 1689, a special chair was made for Mary.

This decoration has been hand made in India by St Nicolas using the traditional rare and respected method of zardozi. Zardozi is a highly skilled embroidery technique that traditionally used gold wires and jewels to embellish courtly robes.