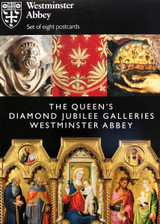 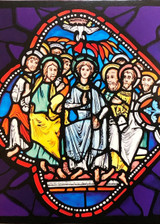 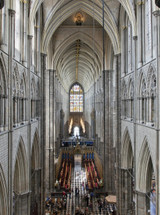 The Queen's Diamond Jubilee Galleries, which opened in June 2018, are an exciting new development in the history of Westminster Abbey.  The eastern triforium, which runs around the Abbey's interior 16 metres above floor level, has been transformed into magnificent new galleries, offering bird's-eye views of the Abbey beneath.

Within the galleries is displayed a unique collection of exhibits relating to the Abbey's 1000-year history, many of which have not previously been on public view.  The display follows four major themes: the development of the Abbey's buildings; worship and daily life in the Abbey over the centuries; the Abbey's unique relationship with the monarchy; and its role as a place of national remembrance and commemoration.

This pack features 8 different postcards featuring highlights of the exhibits and views from the Triforium.