The Feast of St. Michael and All Angels at Wesminster Abbey CD 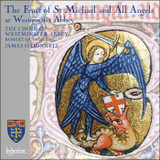 The Westminster Abbey Choir continues their exploration of the rich repertoire of the liturgy in its historical context in the Abbey with music for the Feast of St Michael and All Angels, 29 September.
The texts for Michaelmas are uniquely dramatic and visionary, describing the angelic host and the war in heaven, and have inspired composers throughout the centuries to create settings of thrilling immediacy.
Included is most of the liturgical output of Sir Michael Tippett, whose joyful, extroverted compositional style and powerful sense of drama is perfect for the atmosphere of this festival. Langlais’ tremendous Messe solennelle is unquestionably his finest piece of church music; radiant and impassioned, using the organ particularly brilliantly to create colour and emotional depth.
Herbert Howells’s A Sequence for St Michael is an excellent example of the mature style of the composer, an extended and substantial setting in which the Archangel’s intercession is movingly invoked. These and more established favourites and rarities of the repertoire are performed here with characteristic verve and impeccable musicality in the luminous acoustic of the Abbey.
Track list:
1 Factum est silentium- Richard Dering
2 The Preces – Kenneth Leighton
3 Psalm 148 – Sir Charles Villiers Stanford
4 Te Deum in G - Ralph Williams
5 Jubilate in C – Benjamin Britten
6 The Responses - Kenneth Leighton
7 Messe solennelle – Jean Langlais
8 Plebs angelica – Sir Michael Tippett
9 Psalm 91 – Sir Walter Galpin Alcock
10 Magnificant and Nunc dimittis ‘Collegium Sancti Johannis Cantabrigiense’ – Sir Michael Tippett
11 A Sequence for St Michael – Herbert Howells
12 Laus Deo – Jonathan Harvey