The Feast of St. Edward CD 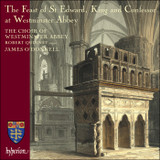 This new recording from Westminster Abbey presents Matins, Eucharist and Evensong as they might be heard on the Feast of St Edward (13 October). The Saint, whose death in 1066 sparked the Norman Conquest, remains buried in the Abbey to this day and his shrine is a point of global pilgrimage.
The Service of Matins is centred on the Morning Canticles from Stanford's epic Service in C, Op 115, while Evensong takes its cue from Purcell's masterful Evening Service in G minor, Z231. The Evensong anthem is the first recording of The King and the Robin, composed for the millennial celebrations of St Edward's birth in 1005 with music by Philip Moore and words by the Poet Laureate, Andrew Motion.
The Eucharist setting is Jonathan Harvey's adventurous Missa brevis, composed for the Abbey in 1995 and here receiving its first recording. This striking, but assuredly liturgical, work combines shouted text and chaotic choral passages into a whole of unusual impact.
Track list
1 Laudes Regiae
2 Preces - William Smith
3 Psalm 132 - William Crotch
4 Te Deum & Benedictus - Service in C Major -Sir Charles Stanford
5 Responses - William Smith and Robert Stone (sung)
6 O God, thou art my God - Henry Purcell
7 Missa brevis - Jonathan Harvey
8 Os iusti meditabitur -Anton Bruckner
9 Psalm 99 - William Morley
10 Magnificant & Nunc dimittis - Evening Service in G Minor - Henry Purcell
11 The King and the Robin - Philip Moore
12 Te Deum, Op - Jeanne Demessieux