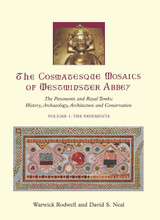 Westminster Abbey contains the only surviving medieval Cosmatesque mosaics outside Italy. They comprise: the ‘Great Pavement’ in the sanctuary; the pavement around the shrine of Edward the Confessor; the saint’s tomb and shrine; Henry III’s tomb; the tomb of a royal child, and some other pieces. Surprisingly, the mosaics have never before received detailed recording and analysis, either individually or as an assemblage. The proposed publication, in two volumes, will present a holistic study of this outstanding group of monuments in their historical architectural and archaeological context. The shrine of St Edward is a remarkable survival, having been dismantled at the Dissolution and re-erected (incorrectly) in 1557 under Queen Mary. Large areas of missing mosaic were replaced with plaster on to which mosaic designs were carefully painted. This 16th-century fictive mosaic is unique in Britain. Conservation of the sanctuary pavement was accompanied by full archaeological recording with every piece of mosaic decoration drawn and colored by David Neal, phase plans have been prepared, and stone-by-stone examination undertaken, petrologically identifying and recording the locations of all the materials present. It has revealed that both the pavements and tombs include a range of exotic stone types. The Cosmati study has shed fresh light on every aspect of the unique series of monuments in Westminster Abbey; this work will fill a major lacuna in our knowledge of 13th-century English art of the first rank, and will command international interest.