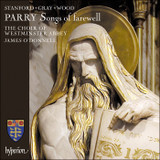 Stanford’s eight-part Latin Magnificat was posthumously dedicated to Parry, whose own Songs of farewell are unmistakably valedictory in mood. Personal as well as musical associations run deep in this poignantly expressive programme, recorded in June 2019 at All Hallows’ Church, Gospel Oak.

Read more about the recording on the Abbey website

Sung by the Choir of Westminster Abbey

STANFORD Magnificat for eight-part chorus in B flat Op

WOOD Nunc dimittis in B flat

4. Magnificat My soul doth magnify the the Lord - Alan Gray

8. My soul, there is a country - Sir Hubert Parry

9. I know my soul hath power to know all things - Sir Hubert Parry

11. There is an old belief - Sir Hubert Parry

12. At the round earth's imagined corners - Sir Hubert Parry