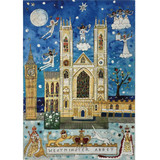 New for Christmas 2022, Lucy Loveheart has depicted Westminster Abbey with the river Thames behind, and Big Ben proudly standing to the left in this beautifully illustrated Christmas card pack. Floating in the deep blue sky above are a host of angels, representing some of the many famous figures to be memorialised here, including the Bronte sisters, Jane Austen, Charles Dickens, Shakespeare and Isaac Newton. In the foreground are Queen Elizabeth I and Queen Elizabeth II representing Westminster Abbey’s special connection with the monarchy and its status as a Royal Peculiar.