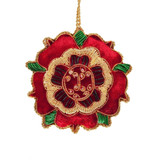 This Lancastrian Red Rose Decoration is inspired by the many rose motifs found in the Abbey; the vaulted ceiling of Henry VII’s Lady Chapel, on the tombs of the Tudor kings and queens, incorporated into iron work and stained glass, and appearing on the Abbey’s coat of arms.

The red rose is the heraldic badge of the royal House of Lancaster and was used by Lancastrian forces opposed to the rival House of York during the civil wars of the 15th century. The opposition of the two roses gave the wars their name: the Wars of the Roses. The conflict was ended by King Henry VII of England who, upon marrying Elizabeth of York, symbolically united the red and white roses to create the Tudor Rose: the symbol of the Tudor dynasty.

Not to be given to children under 36 months.

St. Nicolas specialises in bespoke Christmas decorations and fabric gifts. All the decorations are handmade, and the time taken to make each one is reflected in their unique quality.
Their Indian Christmas decorations are made using the traditional method of zardozi embroidery. Zari (meaning gold) embroidery originated in Persia and reached India in the 12th century. It is a highly skilled embroidery technique that traditionally used gold wires and jewels to embellish courtly robes. Zardozi work is a rare and respected craft, the skills of which are handed down from generation to generation.