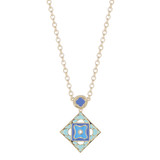 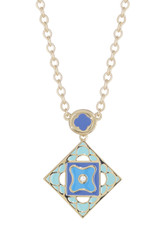 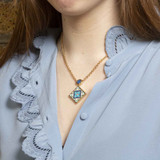 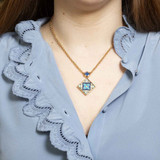 This elegant enamelled necklace has been inspired by the mosaic which surrounds the High Altar in Westminster Abbey.
The necklace is gold plated and hand enamelled. The pendant has been set with a clear stone to the centre to add to its opulent appearance. The necklace has a secure lobster clasp fastening and extender chain allowing it to be worn at different lengths. It has been made exclusively for the Abbey and is gift boxed with a story card.
The present altar and screen were erected between 1867 and 1873 after George Gilbert Scott’s design. The sculpted figures on the screen (Moses, St Peter, St Paul and King David) are by H.H. Armistead. Behind the altar is a mosaic of the Last Supper designed by J.R. Clayton and carried out by Antonio Salviati. The inscription along the top of the screen reads "The kingdoms of this world are become the kingdoms of our Lord and of his Christ" (from the book of Revelation).