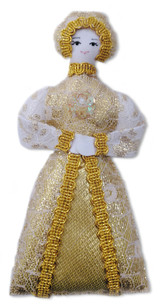 Inspired by Henry VIII’s fourth wife, Anne of Cleves, this decoration would add majestic elegance to any Christmas tree. The highly decorative figure is adorned with gold finish beads, lace and sparkly gold thread to give a regal appearance.
Anne of Cleves (1515 – 1557) was Queen of England from 6 January 1540 to 9 July 1540 as the fourth wife of King Henry VIII. The marriage was declared never consummated, and she was not crowned queen consort. Following the annulment of their marriage, Anne was given a generous settlement by the King, and thereafter referred to as the King's Beloved Sister. She lived to see the coronation of Queen Mary I, outliving the rest of Henry's wives.
Not to be given to children under 36 months.
St. Nicolas specialises in bespoke Christmas decorations and fabric gifts. All the decorations are handmade, and the time taken to make each one is reflected in their unique quality. For 25 years they have worked with a small Christian charity in Thailand that helps disadvantaged rural women find work in their community, rather than being forced to leave home to work in a factory. All the historical figure decorations are made in this way.